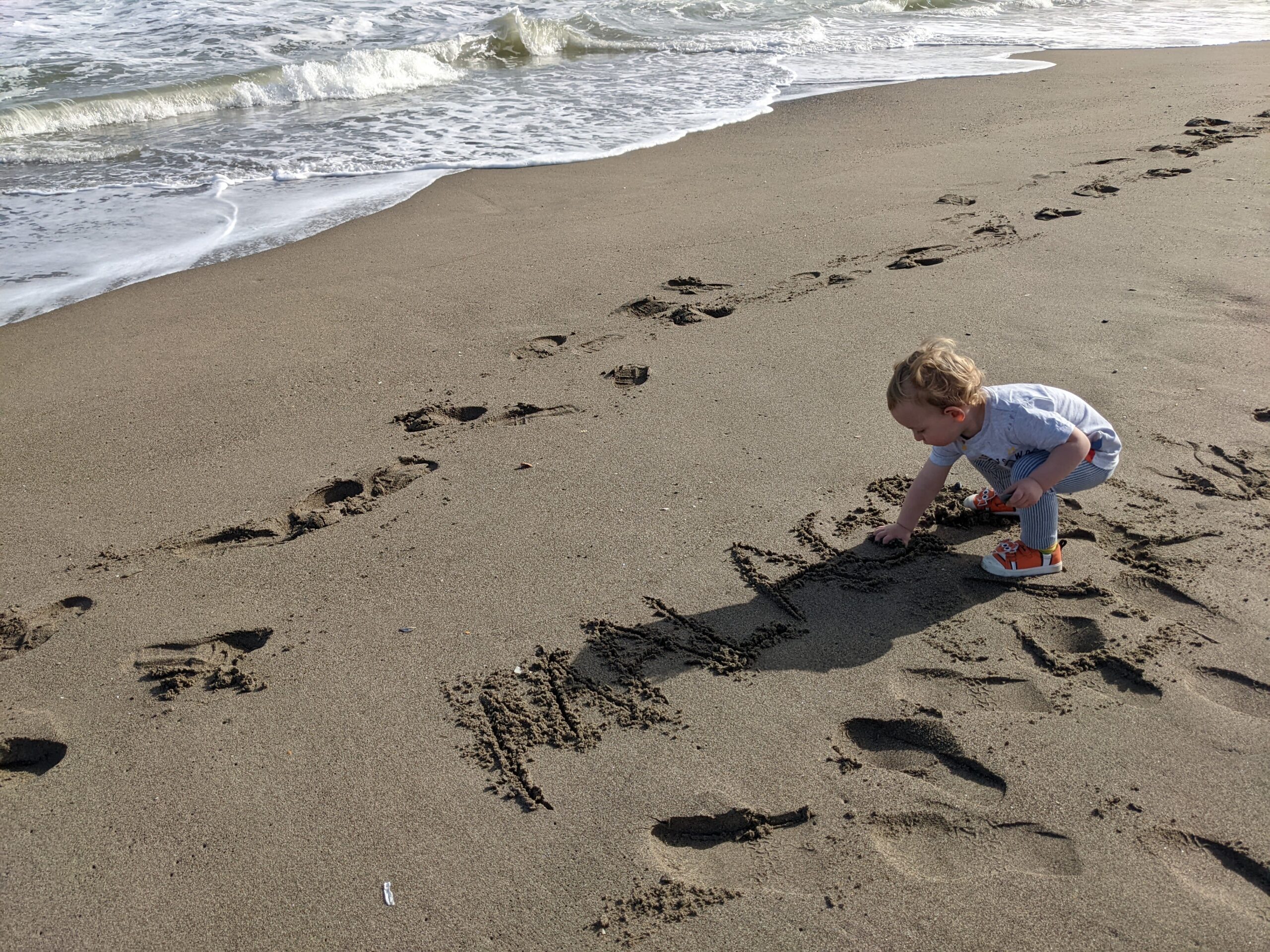 It seems I’ve become a bit obsessed with Spain – the weather, the food and did I say the weather? Because hanging out on the beach all day in February is just the ABSOLUTE BEST. I was almost in tears when we came home and they opened up the airplane doors to windy rainy UK. All I can describe it as it GREY. UGH. Anyway… I digress… Let me tell you about the wonderful week we spent here!

Our hotel was a nice 4-star (Hotel Pez Espada) that had a playground and amazingly it even had a toddler’s pool but OMG it was like standing in ice and they were painting the whole place in preparation for tourist season, so we couldn’t go in anyway. Luckily the sun was shining enough in February (it went up to 22/23C degrees BOOYAH!) so we could play by the sea all day instead! The hotel was literally on the beach (our view from the room was incredible) and out of season is amazing as we had the whole beach to ourselves. Each morning a huge tractor would brush the sand down flat whilst the sun rose and it was so soft and clean – absolutely perfect!

The sun just shone and shone and shone. I forgot what it was like to wear long sleeves and shoes. Can you tell I want to move to Spain now? But I digress – here’s what we did…

We stayed in Torremolinos which is about half an hour from Malaga, but it’s right on the beach. I went to Malaga with girlfriends a few years back and we had a ball – eating, drinking and being very merry, and I remember they both said what a perfect place it was to bring a small child. Then along came Alfie and we decided to find out if they were correct – and they were. The centre of Malaga is flat, easily manoeuvred by pram and tons to do outdoors from running along the water to a lush park running through the city to the pedestrianised shopping area. It felt so safe and easy to just let Alfie run around and do his thing and he found lots of birds to chase and random shops to visit lol!

We ended up taking the bus but I’m not sure I would recommend that – it was absolutely bursting and hot and yeah… we attempted to take the train in the day before (you know we are train-lovers here) but we waited and waited and after nearly an hour we were told there was an incident and no train would be coming after all. This is after Alfie dropped his favourite toy (the planet Jupiter obviously) and like in a slow-motion horror show it bounced on the platform, then down the stairs and onto the bonnet of a car then rolled down over the car’s roof and literally into the tiny gap under the window screen. No manner of searching could find it so let’s just say it was a dash to buy tons of ice cream to brighten up the day… omg… hence the bus journey in case you were wondering.

When you finally get to Malaga I would recommend you pop into the market for food – it’s HUGE and sells everything from fish so fresh it doesn’t even smell when you walk by, to little stalls with fab noms and drinks.

Apart from the different architectural styles, the market is very well organized. There are 3 “departments”: fruits and vegetables; fish; and meat. No mixing, no swapping. In the stands, everything is neatly placed and decorated.
Now, how would you get a stand like they have? Well, one way would be to get married to one of the stall holders (and like that you could enjoy the market every day), since normally they are passed down from one generation to another. True family businesses! says Spainfoodsherpas

My fave thing was these cones of mini meat sausages from what can only be described as ‘The Meat Shop’ – I think Alfie got excited when he saw me with a cone but alas it wasn’t ice cream. Although seriously, is there anything better than ice cream on holiday?

And churros… yup – we did that too at Casa Aranda. It’s the famous one that everyone goes to so just do it. The dippy chocolate sauce is just divine…

Up there with the most beautiful parks I’ve ever been to but WOW it’s on the top of a seemingly never-ending hill. When you look on Googlemaps for directions they forget to tell you that you’ll be pushing a pram up steep hills with basically no pavement. But when you get there it’s well worth it! So well looked-after, clean, no dogs allowed and even security at the gates (I know right??). The playground for the kiddies is epic – HUGE slides (I would show you a video but we flew so fast that my dress flew over my head lol! Tons of swings and the most fun mini trampolines hidden inside the ground all over the place. They even have a tree filled with baby’s dummies that are hung up there to show that the baby has grown out of using them – weird but cute.

This was a special find – Jason obviously had sussed out where to go for boardgames in Malaga and we didn’t have high hopes but the guy working here spoke amazing English and had so much knowledge (of actually great games), a fab selection to buy and a load of second-hand ones for sale on cheap – so we got Alfie a game and he actually loves it! Jason’s dream is to play boardgames with Alfie so we’re starting him nice and young hehe!

So yeah, I’m already looking at booking another trip to Spain or ANYWHERE! Get me outta here! And get me a Sangria while you’re at it hehe!