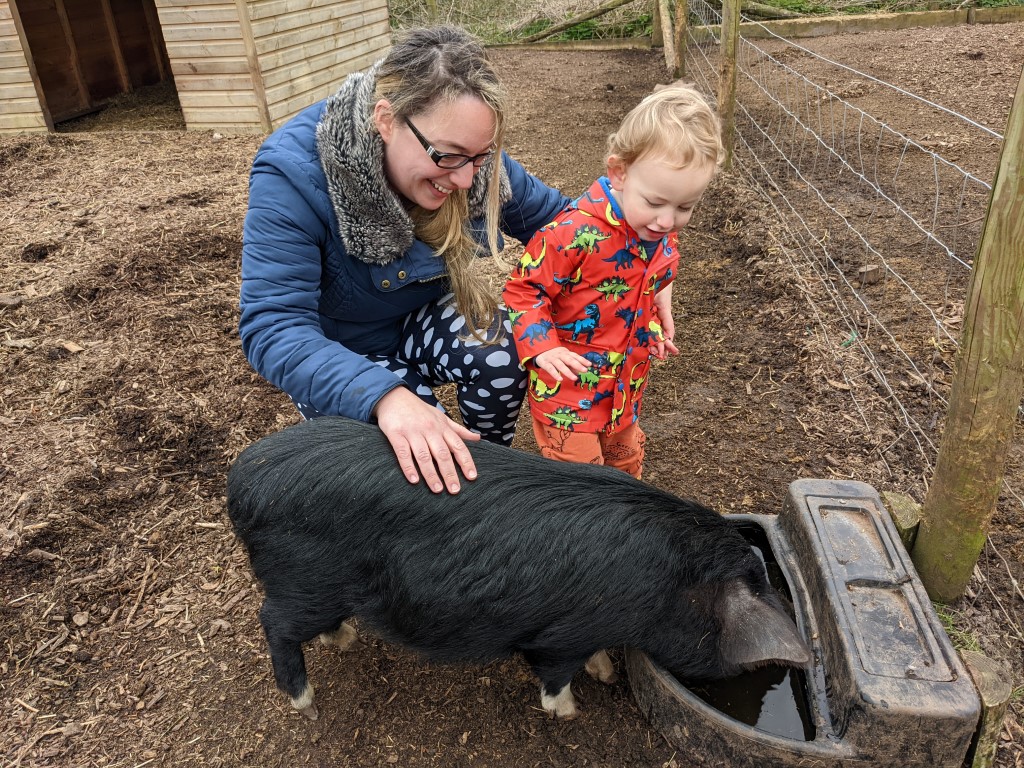 Some of you may already know that we’ve started a new and exciting way of travelling called Home Exchange. Due to Covid it was impossible to leave the country, so we started swapping our home for other people’s homes in the UK. We’ve stayed in some really cool places – I guess the downside is the cleaning up before and after you leave your home BUT you get to stay in a house versus a hotel room and some of the houses are insane cool – plus it’s free! We have had to look after chickens in one place and got to eat the freshly laid eggs in the morning – this house even had a hammock and trampoline in the garden too – it was fab!

Our latest Home Exchange was to Amersham. We wanted to visit my dad in London anyway so when we got a message asking us to exchange homes we thought it would actually be really nice not to drive all the way into London all the time and stay on the outskirts and get public transport into the centre. Yeah… forgot about how every single tube line has a problem every single day. And in the end the trip from Amersham (North-West London) to South London took 3 hours – the same as the drive down from Liverpool – lol! We had to take three buses, four tubes and two trains. Bonkers… but Alfie loves trains so at least he loved it and London is definitely getting more pram-friendly.

Anyway – let me tell you about Amersham. A super quaint little town with some really cool toddler-and-parent-friendly things to do nearby. I think this may have been our top trip with Alfie yet. We did such a variety of things that we were exhausted by the end of the day – a great sign of a fab holiday!

So apparently I used to come here lots as a child and I know why – it’s bloody brilliant! You can hop on a mini train with an ice cream in hand and then wonder around the village. There’s trains to chase after running through the whole ‘village’, boats, a racing track, even a funicular! You can walk over bridges to see huge churches and shops with funny names and at the end there’s a fabulous playground so we literally had an absolute ball here! Plus we came on a weekday afternoon and there was no one around which meant we could run around as we liked – we nearly ended up coming again the next day! There’s also an epic playground for when the little ones get tired included in the grounds.

The Royal Standard of England

Next stop – dinner! And where else but the oldest pub in England? It’s been open for more than 900 years and serves up great pies! You could definitely get lost in here with it’s many tiny rooms and nooks and crannies. The staff were lovely and Alfie was kept entertained by all the weird and wonderful quirky things hanging on the walls and off the beams.

The next day was a mission and a half to get into London, see my dad (Alfie taught him all about the planets and the solar system obviously), then we had a sunset walk in Hyde Park and ate copious amounts of sushi. It was a bit mad but well worth it!

Omg – I love pigs. Like top animal, number one, obsessed. I literally love pigs. And it looks like Alfie has inherited that from me. It was Mother’s Day so I got to choose what I wanted to do so we went to a pig farm and played with little piglets all morning.

You are given a brush as you go in and a tour with information about pigs and the other farm animals (I didn’t even take photos of the geese and chickens etc – I was here for the pigs lol)! Then you can wander around freely cuddling pigs and brushing them. They are used to humans so are really sweet and they love human contact. Literally a magical day! Oink!

Our last day was spent in Marlow with it’s insane playground! I mean this photo only shows about a quarter of it – there’s big swings, little swings, slides, climbing frames… it was fab! The weather was glorious and we spent a few hours here with our lovely friends and their kids – a really quaint little town on the Thames.

I feel like we didn’t do anything in Amersham so the title is a bit misleading but hey ho – we stayed in Amersham so there you go! Definitely recommend all the fun things we did whether you’re a big or a little human. Go Go Gooooooooo!